Mark Zuckerberg is an incredibly successful entrepreneur. He recognizes that people desire to communicate with one another and frequently choose to do so online rather than in person. And it was the discovery of this tendency that led to the creation of Facebook, which now has over two billion users. Everyone may benefit from his achievements as well as his business and life philosophy.

Be enthusiastic about your work!

Most successful business people worldwide have one thing in common: they are enthusiastic about what they do. Mark Zuckerberg advised, "Find that thing youre really enthusiastic about." Mark, interestingly, turned down Yahoos billion-dollar takeover bid early on. His enthusiasm for Facebook enabled him to overcome challenges and continue to innovate. An entrepreneurs passion is what makes them a successful business leader.

Mark Zuckerberg has always been concerned with solving issues and putting innovative ideas into action. He wouldnt accept anything less than perfection. This is what has made Facebook one of the worlds most successful businesses.

Accept responsibility for your errors.

Mark Zuckerberg has been the subject of various controversies, accusations, and other issues from the beginning of his career. If he makes a mistake, he accepts responsibility for it. Thats precisely what the best leaders do. Its critical to own up to your error and move on after youve admitted it. When you merely think about it, nothing positive happens.

According to Mark Zuckerberg, a successful CEO should take a risk now and then, but not too often. "The biggest risk you can take in a world that is changing so quickly is not taking any risk," he said. Furthermore, Zuckerberg encourages his staff to share their passions and take risks.

Have faith in yourself

The most outstanding leaders in history have had unwavering self-belief and confidence. Mark created the music software Synapse when he was a youngster. Microsoft, the Redmond behemoth, offered to buy the software and recruit him, but he declined. Thats a lot of self-assurance! Never doubt your skills, and never allow anyone to bring you down.

"A leader must notice and respond to external opportunities, internal capabilities, and culture, as well as all of their relationships before they become obvious components of conventional wisdom." Satya Nadella is the CEO of Microsoft.

When Satya Nadella became Microsofts CEO, the corporation was making headlines for all the wrong reasons. He needed to move fast to shift the companys focus away from its failing cell phone segment and toward other aspects of the business, such as cloud computing. The efforts have paid off, and Microsoft is back on pace for growth, with innovation and consumer value at the forefront of its strategy.

Plans and strategies are vital, but they are not necessary for a companys success. Someone with a vision, a leader who decides what the companys future should be, is required at the top.

Make decisions based on data

What factors do you consider when making a decision? Do you go with your intuition, or do you take a systematic, data-driven approach? Both of these approaches are on opposing sides of the spectrum, and each has its own set of advantages and disadvantages.

A leader who relies on instincts to make decisions will be able to move fast. The danger is that the leader will doubt herself, with the shadow of uncertainty following her about all the time. Furthermore, an inexperienced leader who has not sufficiently trained her mind to look ahead of the curve is more likely to fail.

A data-driven decision-maker may be unable to respond quickly enough to rapidly changing market conditions. Furthermore, it takes an experienced leader to recognize data issues and prevent potentially disastrous actions. The facts may be acceptable, yet the inference may be incorrect. Again, the leaders ability to see the issue is dependent on their expertise.

Satya believes that every company leader relies on his or her gut instinct at the end of the day. On the other hand, Microsoft collects massive volumes of data that will assist the CEO in making a more educated decision. Data can be used to confirm a theory or prompt the CEO to find unexpected connections to come up with new solutions.

Its simple to demonstrate leadership when you have all of the facts, the systems are in sync, and the future is spelled out for you. Small business owners and CEOs sometimes face scenarios in which they must make judgments based on inadequate information and operate with disjointed systems.

A critical trait of a leader, according to Satya, is the ability to enter into a situation when the future is uncertain and bring clarity to the organization and the people. If you can clarify a situation where everyone is panicking and map out the next few steps, youve proven yourself to be a leader.

Obtaining a leadership position necessitates a great deal of effort and sacrifice. However, once a person reaches that level, its easy to believe that they understand everything. This arrogance could be your undoing.

Satya believes that leaders should be modest and shun arrogance. According to Microsoft CEO Steve Ballmer, the world we live in is "over-constrained." Technology advances rapidly that no one can keep up with all that is happening in the industry. If you act as if you know everything, youre going to lose. Instead, have an open mind and try to learn as much as possible.

Elon Musk is one of the worlds wealthiest persons, best known as the Chief Executive Officer (CEO) of Tesla Motors. He made his money in the technological industry. After being born in South Africa, he traveled to Los Angeles to pursue his goals in the famed Silicon Valley. He began his career by founding and selling technology companies, starting with Zip2. He co-founded PayPal, the online money transfer giant, and now leads SpaceX, a rocket company. The billionaire is one of just two people in the world to have started and sold three billion-dollar businesses. Elon Musk, a builder and creator, rolled into one, is unquestionably one of the most outstanding achievers of all time.

Have a strong vision.

The most successful leaders are those who have a clear vision. They communicate it with their teams and lay out a clear plan for how theyll get there. Furthermore, they can influence others to see their point of view. Successful leaders, like Elon Musk, have a revolutionary vision. Their ideas not only have a good impact, but they also radically alter the way the industry operates. He co-founded PayPal, which revolutionized the global money transfer market. As a result, Elon teaches us the importance of having a transformative and robust vision.

According to his track record of invention, Elon Musks ideas dont only create a single product; they have a long-term impact on the industry. PayPal revolutionized the banking sector by digitizing money transfers and making it simple for people worldwide to send and receive money via the internet. His SpaceX initiative will have a long-term impact on space flight. He wants commercial space flight to be a reality. Elon Musk thinks large, and he teaches us how to accomplish the same through his escapades.

Concentrate on your companys most crucial activity.

Elon Musk, Warren Buffet, and Mark Zuckerberg all have one thing in common: they are all billionaires. They are CEOs of multibillion-dollar corporations who appreciate the importance of laser-like focus. They both think that it is best to concentrate your efforts on improving a product rather than selling it to the market. Elon has stated that he would rather under-market a revolutionary product than promoting average one. If you apply this lesson to your life, the quality of your products or services will improve. 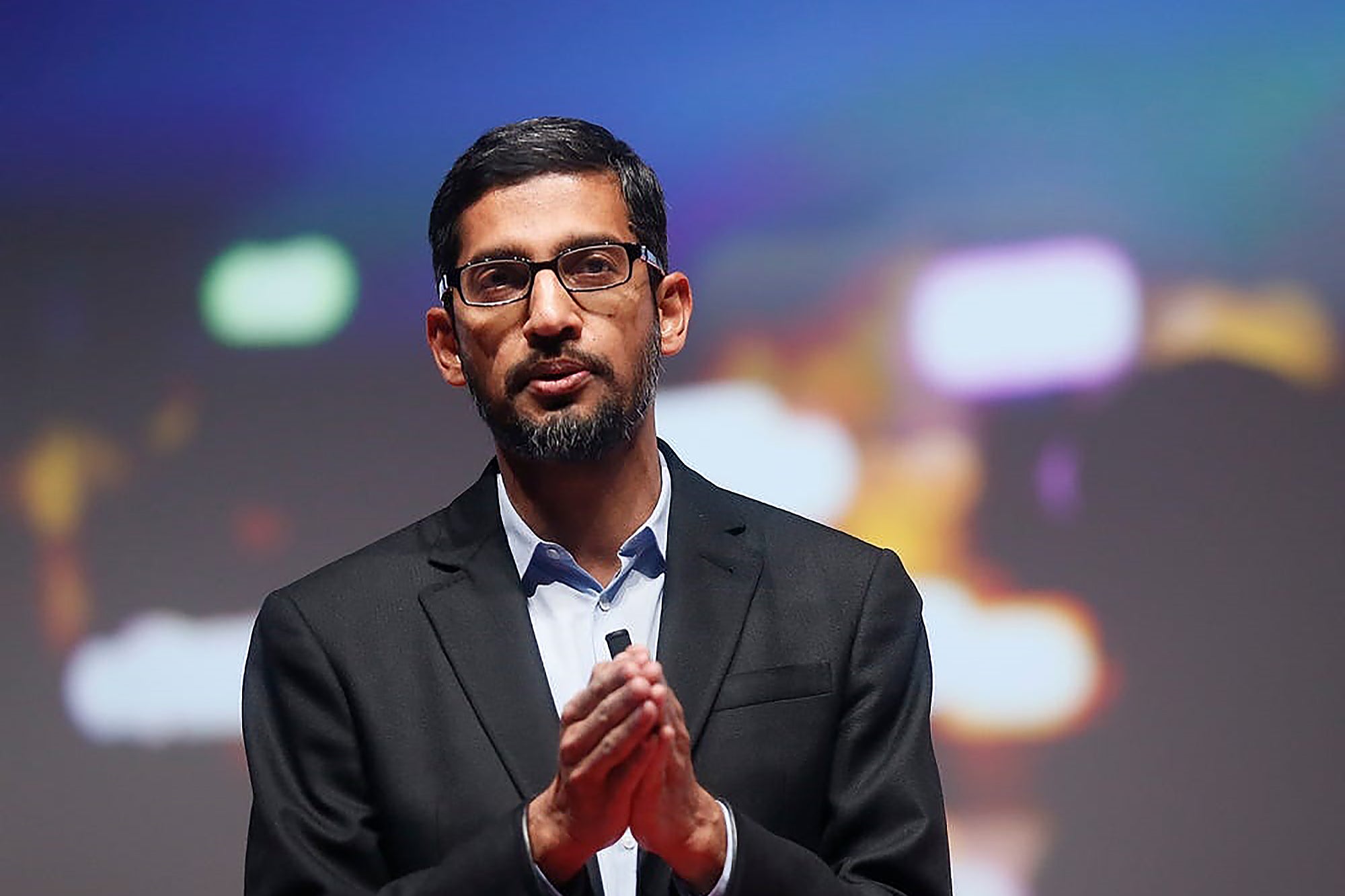 Sundar Pichai, who took the internet by storm when he was named Googles new CEO in 2015, requires no introduction. Sundar Pichai took over as CEO of Alphabet in 2019, replacing Larry Page.

Pichai has held different positions and created breakthrough products such as Gmail, Google Drive, Google Maps, Google Chrome, and even Android since joining Google in 2004 and rising to become CEO of Alphabet in 2019.

It makes no difference where you begin.

You can always change anything in your life if you want to, no matter where you started or what your background is. Alternatively, you may leave things alone. Sundar Pichai aspired to advance in his career, which is why he didnt care if he came from a modest family. He was born and raised in a poor two-room family in Madurai, Tamil Nadu, but his dedication to school earned him admission to IIT, setting the groundwork for his career.

Have the audacity to dream large.

Being from a middle-class family didnt stop Pichai from dreaming, and its because of his dreams that hes now where he is.

Some people never set higher goals because they believe they are "unattainable." By declaring a goal unattainable, youre essentially establishing limitations for yourself, which are frequently undesirable. If there is no end goal, you will never reach it. To be successful, you must first visualize it and then begin taking steps toward it.

Continuing to be unique and take chances

When people stand out from the crowd, they are sometimes criticized at first, which is why they want to reform themselves and return to "normalcy." Thats a waste of time. Giving up your individuality in favour of normal behaviour could mean abandoning your fundamental essence.

Staying unique is dangerous by definition because youre probably in an unexplored area. You wont see many individuals who have taken the same route as you, so youll have to improvise a lot.

Pichai continued to think outside the box at Microsoft, taking risks and leading the firm through one of its most significant changes: adding hardware and retail to its product line.

This article was written by Nicholas Mushayi, a consultant at the Industrial Psychology Consultants.