The most obvious and direct factors are the size and complexity of the organization and the related experience and skill level required by the CEO. The actual performance of the company will materially impact annual bonus and long-term performance-based incentive payout levels. The overall market demand for talent within a certain industry, in comparison to the supply of well-qualified executives, will also have an impact on pay levels. The health care sector is a typical example of a sector in the lead when it comes to CEO compensation. CEOs in this industry often possess a very specific set of skills when it comes to identifying and integrating strategic acquisitions to build value. The high level of mergers and acquisitions activity in this industry means there is a relatively higher risk. CEOs typically demand a market premium in pay to offset this risk.

Research on CEO Compensation trends over the years has shown that awards have more often than not hinged upon some performance metric. Additionally, plan-based bonuses and performance incentives have seen a higher, widespread usage, while discretionary bonuses still remain few and far between. Furthermore, Knowlton (2018) states that, as the voices of activists and institutional investors have become louder and more pronounced, pressure has continually mounted upon boards to align the pay of CEOs with the long-term company strategy, as well as the interests and returns of shareholders. As a result, a majority of large companies highlight some form of shareholder engagement in the annual proxy statement, with discussions on executive pay a principal engagement topic.

Evaluating CEO Compensation in terms of Base Salaries, Short Term Incentives and Long Term Incentives, the Mercer Analysis report illustrates the average pay mix of a CEO from 2014 to 2018 as shown below: 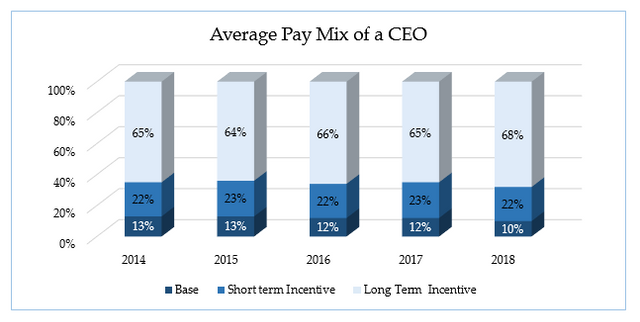