What does conscientiousness mean?

In accordance with the most frequently accepted definition, conscientiousness is "a tendency to devote a considerable deal of effort and energy to the pursuit of goals, and to place a high value on being meticulous, demanding, and well-organized." If you think about it, this seems a little bit like its original meaning, which was someone who was responsible, hardworking, and considerate. The term "conscientiousness" nowadays describes a group of similar but different personality traits, including the drive to complete tasks and an emphasis on following a structured approach to problem solving. The conscientiousness of a person is characterized by their ability to be organized, thorough, and self-disciplined — they enjoy organizing their lives, following through on their goals, and keeping everything in its proper place.

Related: Conscientiousness: Everything you need to know

To put it another way, being high on conscientiousness means having a strong disposition to be responsible, hardworking, and thoughtful in the traditional sense of the phrase. People with high conscientiousness tend to place a high value on order and organization, and they are generally skilled planners who are able to accomplish a great deal with the least amount of effort. Aside from that, they're often ambitious and goal-oriented, which aids them in keeping things under control. Being low in conscientiousness, on the other hand, indicates that one has a proclivity to be flighty, undisciplined, and untrustworthy in ones behavior.

People with high conscientiousness tend to be driven and motivated in their endeavors. They have a strong drive to achieve their objectives and are usually quite focused on what has to be done to achieve them. They are also quite adept at retaining their concentration on activities and are often very productive. Their organizational skills and attention to detail make them particularly adept at tasks that take a great deal of preparation, such as studying for exams or writing papers. They thrive under pressure and thrive under regularity. 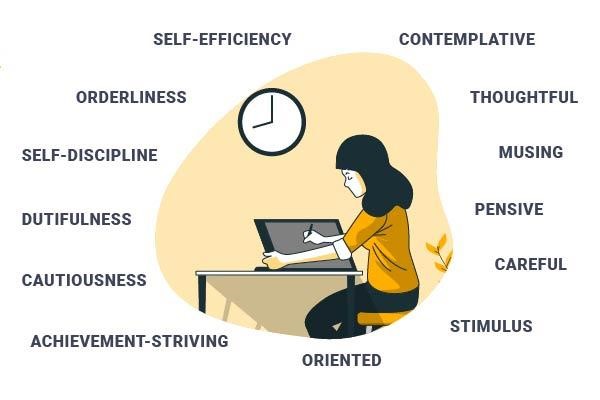 When it comes to long-term goals, people with high conscientiousness tend to be focused and committed, which can help them excel in school or at work. These people are also known for being responsible, organized, and determined - they like to plan ahead of time and are generally good at following through on their goals. This can give the impression that they're "trapped in their minds," as one of my friends described it, but it's actually a positive characteristic. Conscientiousness is frequently associated with the capacity to get things done and the drive to attain goals in one's life.

Conscientiousness is a personality quality that describes a person's level of efficiency and thoroughness. The conscientious individual is motivated to perform a task well and, in most cases, does it within the specified time frame. They are likewise driven to attain their objectives and will not accept the word "no" as an answer. People who have a low level of conscientiousness are less likely to complete assignments and are more impulsive in their actions.

Conscientiousness is a term used to describe the inclination to be well-organized, to plan, to stay on target, to do one's duty, and to stay away from distractions. Planning, staying on task, delaying gratification, and being able to manage impulses are all characteristics associated with this inclination. People with high conscientiousness are frequently described as being organized, planning, remaining on track, being responsible, and being in control. All of these characteristics are required for achieving academic achievement.

It is possible to find numerous hypotheses in the scientific literature that explain what conscientiousness is and what causes it to differ across persons and between situations. Generally, conscientiousness is defined as an ability to set objectives and accept obstacles, which is the most prevalent definition of the trait. In more detail, organized, dependable, responsible, and thorough individuals are characteristics of conscientious individuals. In school and in careers that demand planning and organization such as engineering, accounting, and medicine, those who possess these characteristics are frequently rewarded and do well.

The term "conscientious" refers to someone who upholds or demonstrates high moral ideals, values, or standards in his or her thoughts, words, and actions. This characteristic is frequently connected with individuals who are well-organized, self-disciplined, and goal-oriented. People who have a high level of conscientiousness are usually neat and ordered, and they seek to get the highest possible grades in their academic endeavors.

Psychologists use the term to refer to a personality trait that is a measure of one's willingness to conform to social norms, obey the rules, and perform their responsibilities. This type of conscientiousness is referred to as "conventional conscientiousness" in some circles. However, when people use the word conscientiousness, they are usually referring to something entirely different: a personality attribute that is a measure of one's ability to perform one's responsibilities and obligations.

Conscientiousness defines people who have a disposition toward perfectionism, thoroughness, and orderliness. Conscientious people are productive and efficient because they tend to be well-organized and have a structured approach to their life. They are doers rather than dreamers.

The trait of conscientiousness, which is characterized by self-discipline, high standards, and efficiency, is found in both men and women. Those that are conscientious are motivated by a desire to achieve their objectives and are known to be hardworking and well-organized. Conscientious individuals are role models in a variety of ways. Although conscientiousness is a personality trait, it is also related to a variety of other actions and qualities.

Conscientiousness is often thought of as a personality quality, but it is much more than that. It's a way of being in the world. It is both an approach to doing and a method of thinking. But doing the right thing is not enough; it is also important to do the right thing for the appropriate reason.

The term "conscientiousness" is frequently used to characterize someone conscientious and self-disciplined in their profession. However, what exactly does it mean to be conscientious? What characteristics does it draw attention to, and what are the advantages of being conscientious?

Conscientiousness is a personality attribute that describes a person's ability to maintain a high level of self-control. People with a high level of conscientiousness are motivated by a desire to succeed; they despise being unproductive, and they like to plan ahead of time rather than just plunging into things. They're also driven to achieve their objectives and dislike it when objectives are imposed on them by other people. People who have low conscientiousness, on the other hand, are default liars, avoidant, and impulsive; they like to let things happen rather than plan them, and they don't mind being led by others in their lives.

According to the findings of the research, conscientiousness is one of the most consistent and dependable indicators of future academic achievement in children. This is primarily because conscientiousness is a trait that can be learned and improved upon through time. The more the amount of time a person is exposed to a certain work or environment, the greater their level of conscientiousness.

According to the findings of the research, higher degrees of conscientiousness are closely connected with higher levels of job performance. When it comes to being conscientious, employees are more likely to arrive at work on time and stay late without prior notice, refrain from taking extended lunch breaks, and refrain from participating in festivities that are not related to their jobs.

According to the findings of researchers, there is a favorable relationship between conscientiousness and job performance. The higher a person's level of conscientiousness, the better their ability to function in the workplace. This is true independent of a person's position, employment, or industry. This shows that there are no clear-cut circumstances in which someone is "overly" or "underly" conscientious for a certain job in which they are employed.

Research also shows conscientious individuals are more likely to persevere in the face of adversity and struggle, resulting in higher levels of productivity and efficiency at the workplace. As a result, it is particularly noticeable in situations when high degrees of precision and accuracy is required. Examples include the medical and legal industries. Greater conscientiousness, on the other hand, is also associated with greater rates of employee turnover in industries where there is little space for error or failure, such as the banking and technology sectors.