Women in science: Statistics you need to know

The Science Council defines science as the pursuit and application of knowledge and understanding of the natural and social world following a systematic methodology based on evidence. When it comes to women in science, most literature refers to the fields classified as STEM (science, technology, engineering, and mathematics). STEM fields include natural sciences (physical, biological and agricultural sciences), engineering and engineering technologies, computer and information sciences, and mathematics (Chen and Weko, 2009). Some literature includes social science and psychology fields, however, most research excludes these fields

Research about women in science mainly focuses on the fact that women are a minority when it comes to science and research. Various measures have been applied to try and improve the statistics worldwide over the years. The numbers are improving (Blickenstaff, 2005), however, there is still a long way to go. As a woman in science, I can attest that there are many opportunities targeting women in science to motivate their involvement in the field. However, these opportunities have not been able to increase the numbers at the expected rate.

It is proposed that there is a leakage of women in science in the pipeline that starts at high school, going on to university, and up to jobs in industry and academia. At each stage, the number of women decreases such that at the top of the pipeline, there are very few women in the science field. Various reasons are said to be the cause of this pipeline leakage. Some studies suggest that discrimination and denial of access for females in the science field is the cuase (Lawal, 2007). From as early as primary school, boys are encouraged to keep on pushing until they get things right whilst girls are allowed to give up. Teachers are said to be biased towards males, paying more attention to their scientific interests than they do to females. Also, fields such as engineering tend to be perceived as masculine fields and girls eventually end up moving away from these fields.

Other studies suggest a theory of self-concept (Lawal, 2007) as a cause of the challenges. Self-concept inspires how one views themselves as either fitting or unfitting in a certain role. Students may end up making choices based on their gender, according to whether they view certain roles as fitting for their gender or not (Eagly, 1987; Eccles,1987; Raty, Vanska, Kasanen & Karkkarnen, 2002).

When I applied for my undergraduate studies, I wanted to study Electronic Engineering, but I obtained a place for Computer Science. During the process of trying to switch to Electronic Engineering, I met with the Engineering department’s head. She talked me into accepting what I had obtained because engineering jobs in industry were difficult for females, and even gave examples of jobs that would be better suited for males than females. This changed my self-concept at the time and clearly shows how some females leak from the pipeline.

The UNESCO Institute for Statistics (UIS) gives a summary of statistics for women in scientific research: 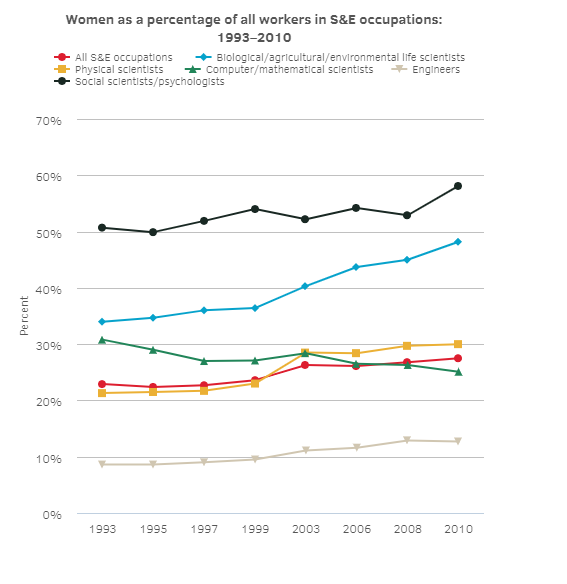 Women are underrepresented in science fields. Most statistics in this article show women being less than 50% of the science fields that are discussed. Universities and organizations have been taking steps to improve the numbers of women in STEM fields and there has been an improvement. However, there is still a long way to go. Some studies have shown that women earn less in science careers and fewer women are in leadership positions in these fields. For human resources teams, this could suggest that they should create policies that do not discriminate against women. For example, they could ensure gender balance in departments, especially for the departments in STEM. This means that hiring processes should factor in such issues. Universities could have different cut-off grades for males and females which encourage more females to apply for STEM fields. Hiring processes at companies could be inspired by such examples to create gender balance in science careers.

Lawal, I., 2007. Women in science and engineering: Politics of gender. In Conference Proceedings.