The importance of knowing your organizations culture

An organisation’s culture will make or break a company’s success.

Where there is an organisation, there is culture. How often do you think of groups of people having their own culture? It does not always have to be formal but it does affect how people behave towards each other and towards other people outside of that group. Take a minute to think about the culture in your workplace, your friendship circle, and even the culture that presides in your home. You will pick up the fact that wherever you go, a culture will be present. If culture follows us wherever we go, should it not be a more prominent topic of discussion? This has started and according to a survey conducted in the USA by Heinz (2021), 46% of job seekers agreed that company culture is a top priority when looking to work for a certain organization. A positive culture is a key driver to success.

This article will explore the importance of being aware of your organisation’s culture, whether as an employee or the employer.

What is organisational culture?

In addition to the expressed values, vision and mission, organisational culture is all about the collective beliefs, ethics, and behaviour that make up the business. It is less about how much a person is getting paid but more about a feeling that is created than specific programs that are put intoThe “right” culture place. It’s affected by the way that the organisation is led and is hugely influential in the organisation’s success.

Another definition is that organisational culture is viewed “as a DNA that is not visible, but a very powerful tool that shapes what happens in an organisation” (Ibidunni & Agboola, 2013). The DNA as many knows is the core part of any organism. Without this, there cannot be anything tangible.

There are four types of organisational cultures and each organisation falls into either one of them. One organisation can have characteristics of more than one culture at the same time. 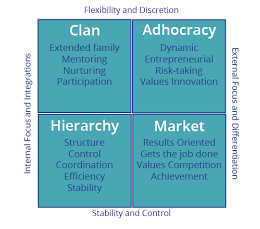 The Clan Culture - This culture is focused mainly on collaboration. Members share commonalities and see themselves are part of one big family who is active and involved. Leadership takes the form of mentorship, and the organisation is bound by commitments and traditions. The main values are rooted in teamwork, communication and consensus (Ibidunni & Agboola, 2013).

The Adhocracy Culture - This culture is based on energy and creativity. Employees are encouraged to take risks, and leaders are seen as innovators or entrepreneurs. The organisation is held together by experimentation, with an emphasis on individual ingenuity and freedom. The core values are based on change and agility (Ibidunni & Agboola, 2013).

The Market Culture - This culture is built upon the dynamics of competition and achieving concrete results. The focus is goal-oriented, with leaders who are tough and demanding. The organisation is united by a common goal to succeed and beat all rivals. The main value drivers are market share and profitability (Ibidunni & Agboola, 2013).

The Hierarchy Culture - This culture is founded on structure and control. The work environment is formal, with strict institutional procedures in place for guidance. Leadership is based on organised coordination and monitoring, with a culture emphasising efficiency and predictability. The values include consistency and uniformity (Ibidunni & Agboola, 2013).

The importance of being aware of the organisation’s culture

Being aware of how the environment and structures around you affect you is an important part of being an employee in the 21st Century. Before the focus was mainly on salaries but now, the narrative is shifting to a more holistic outlook on an individual’s experience at work. There are many reasons why it is important to be aware of the practices that take place around you and below are some core reasons why this should be a priority.

Organisational culture defines your company’s internal and external identity (Moseley, 2020). The way that business is conducted within the organisation will directly be reflected on the outside of the organisation. For example, if people treat each other with respect at work, chances are low that they would not do the same towards others on the outside. Have you been to a fast food let out where employees are not afraid to put on a fight in-front of customers? Because this can so easily be done right before your eyes, it will most likely happen to you. You start to wonder what their environment behind the scenes must be like.

Company culture may help you attract and retain the best talent in the market. Whether a company offers competitive salaries or not, an emerging large aspect of talent management is in the way employees are managed. This includes their experiences in that organisation and the policies, procedures and structures set in place by the top management of the organisation. 15% of employees have reported having left their job because of the negative culture that has surrounded their workplace (Heinz, 2021).

Many times when one sees that they do not like the culture of an organisation they are in, it is one of two things: either the culture is negative or they are just in the wrong organisation, to begin with. The theory “Person-Environment Fit”, explains this phenomenon. Right from the beginning, it should be analysed that the hiring managers are hiring the right person for the organisation and that the individual is aware of the culture that they are about to enter.

This theory is broadly defined as the compatibility between individuals and their environment. There are three main outcomes of achieving the right person-environment fit:

As a job seeker, it is important to look for an organisation that will align with who you are as a person. As a manager and existing employee of an organisation, it is also important to put in the effort, to ensure a conducive environment for those who are already in the organisation or for future employees.