Developing an elevated workforce is becoming increasingly crucial. Company leaders must be able to motivate employees to go above and beyond their job responsibilities. As a result, new leadership paradigms have evolved, one of which is transformational leadership.

This type of leadership is critical for firms focused on disruption and inspiration. Employee empowerment and work happiness are aided by transformational leaders use of intellectual stimulation and inspiring motivation.

What is transformational leadership?

Transformational leadership is a leadership style that affects both individuals and societal systems. It promotes useful and constructive transformation in followers in its ideal form, with the eventual objective of growing followers into leaders. In its purest form, transformational leadership improves followers motivation, morale, and performance through several techniques. These include integrating a followers sense of self into the organisations mission and group solidarity. They inspire followers by being a role model; challenging followers to take greater ownership of their work, and understanding followers strong and weak points so the leader can match them to responsibilities that maximise their effectiveness.

The phrase "transforming leadership" was coined by James MacGregor Burns (1978) in his descriptive study of political leaders, but it is also used in organisational psychology. Transforming leadership, according to Burns, is a process in which "leaders and followers assist each other in achieving a greater sense of motivation and productivity." Burns discussed the difficulties in distinguishing between management and leadership, claiming that the differences are based on personality traits and behaviours. He introduced the concepts "transactional leadership" and "transforming leadership." The transformational strategy, according to Burns, results in major changes in the lives of individuals and organisations. It alters staff aims and aspirations by reshaping views and attitudes. Unlike the transactional method, it is built on the leaders personality, attributes, and capacity to govern by example, articulate an exciting vision, and set demanding goals rather than on a "give and take" interaction. In the sense that they are moral exemplars of working for the good of the team, company, and community, transformative leaders are idolised. According to Burns, transformational and transactional leadership styles are mutually incompatible. Transactional leaders often do not push for corporate cultural change and instead operate within the current culture, but transformational leaders might attempt to alter the corporate culture.

Bernard M. Bass (1985) expanded on the findings of Burns (1978) by exploring the cognitive conditions that enable transformative and transactional leadership. The effect of a leader on his followers is the first criterion for determining whether or not he is transformative. Bass expanded on Burns (1978) early thoughts to help explain how transformational leadership may be assessed and how it affects follower productivity and commitment. The followers of such a leader have faith in, adoration for, allegiance to, and loyalty towards the leader and are prepared to work more than anticipated because of the transformational leaders traits.

These outcomes arise because the transformational leader provides followers with more than simply a way to make money; they provide followers with an exciting goal, vision, and a persona. The leader transforms and encourages their team through inspirational motivation (formerly known as charisma), intellectual stimulation, and personalised concern. Additionally, this leader motivates people to think of new and imaginative ways to challenge the status quo and transform the environment to achieve success. Finally, in contrast to Burns, Bass proposed that leadership may exhibit both transformative and transactional leadership simultaneously.

Transformational and transactional leadership positively predicts a wide range of performance outcomes, including individual, team, and organisational level factors, according to 30 years of research and several meta-analyses.

Transformational leadership may be found at several levels of an organisation, including teams, departments, divisions, and the overall organisation. Imaginative, motivating, courageous, risk-taking and intelligent thinkers are these kinds of leaders. They have a magnetic personality. However, charisma alone is inadequate to change the way a company runs. Transformational leaders must demonstrate the following four characteristics to effect big changes: 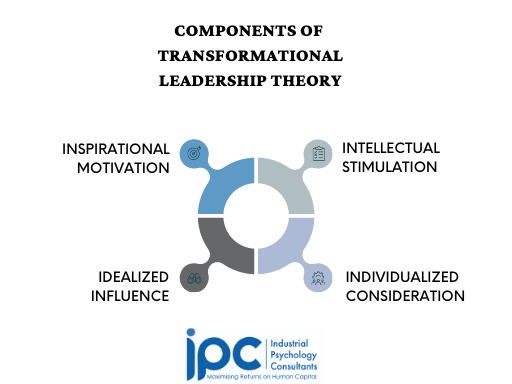 Inspirational Motivation: Promoting a consistent vision, purpose, and system of principles to followers is the cornerstone of transformative leadership. Transformational leaders lead by offering purpose and challenge to their followers. These leaders know what they want from every encounter because their aim is compelling. They labour tirelessly and positively to promote a sense of cooperation and dedication.

Intellectual Stimulation: Such leaders inspire their employees to be creative and imaginative. They promote fresh ideas from their followers and never publicly condemn them for their blunders. Leaders concentrate on the "what" of challenges rather than the "blaming" aspect. They have no qualms about abandoning an old technique that they established if it proved inefficient.

Idealized Influence: They assume that a leader can only influence followers if they practice what they preach. Leaders serve as role models for followers to aspire to become. Through their actions, such leaders ultimately earn the confidence and commitment of their followers. They often prioritize their followers concerns over their own, forego personal benefits for others, and exhibit honesty and integrity. Such leaders use authority to persuade them to work toward the groups shared objective.

Individualized Consideration: Leaders serve as coaches to their followers and recognize and reward them for their creativity and ingenuity. The followers are differentiated based on their abilities and expertise. They are given the authority to make recommendations and are always given the necessary backing to carry them out.

In todays unpredictable world, marked by worldwide volatility and organisational turbulence, transformational leadership is required at all levels of the business. Such leaders followers exhibit high work satisfaction, organisational loyalty, and citizenship behaviours. With such a dedicated staff, it will undoubtedly be beneficial to explore establishing methods for reforming a business via leadership.

Apples iPhone. Office by Microsoft. The automobile and streaming entertainment services. These commodities and services altered civilisation during the industrial era, but they also have another commonality: they were all designed under the leadership of transformational leaders.

Jeff Bezos has always known that a successful business is about concentrating on the consumer, as evidenced by a recently resurfaced 1999 interview with the Amazon founder. Despite the reporters skepticism in the video, Bezos presents a bold vision of what the worlds greatest online store could become - and how he would achieve it. In many ways, Amazon is the perfect illustration of transformational leadership, illustrating that by concentrating on a series of short-term tasks (the company began as a bookstore, after all), it is possible to achieve loftier goals.

John D Rockefeller was unquestionably a transformative leader among the most prominent and influential nineteenth and twentieth-century entrepreneurs. His investments in kerosene reduced the nations economic dependency on whaling, and he consolidated and changed the young oil and gas business in the United States. Although dubbed a robber baron, Rockefeller was an undeniably successful businessman, with his charity serving as an excellent form of corporate citizenship.

Bill Gates transformed the worlds landscape with his Windows operating system and his integration of software, such as the Microsoft Office suite, with personal computers. However, Mr. Gates had to conquer preliminary conflicts with the US Administration over anti-trust suspicions, with the operating system becoming a foundation of more effective corporate operations and expanding potential.

Steve Jobs, Bill Gates former adversary, likewise adopted the transformational leadership paradigm to improve his firm. While the Apple computer was a middling breakthrough on its own, Jobs takeover of the company – and the debut of its now-trademark innovation, the iPhone – dramatically altered the game for both Apple and the world.

Despite his dictatorial tendencies, which ultimately contributed to his departure as CEO during his first stint, Jobs pursued a more progressive approach following his reinstatement. This entailed making important decisions in Apples commercial, engineering, and product management and drawing everyone together under Jobs magnetic and ingenious leadership.

Ford was able to solidify his status as one of the all-time leading transformative leaders by operating on the business idea that "to do more for the world than the world does for you" is a definition of success. By creating and popularising the automobile – a process Ford visualized while watching a meat-packing factorys production line (mass production) – Ford revolutionized the face of the world in ways that even he could not have predicted.

Related Article: 15 reasons why leaders fail and what to do about it