Gone are the days when women were co-opted into leadership positions to appease the large female constituency or for PR niceties. In the shadows of giants like Madam Thatcher, Mother Theresa and several other great women leaders of the previous century, women in the 21st century have grown more assertive and bold in their push to end gender inequality and injustice in decision-making bodies. Though few in numbers women leaders have impacted the world in some unimaginable ways and l believe it’s the right time the world recognize their leadership and commit to pursuing gender equality beyond lip servicing.

The handling of the covid-19 pandemic by women leaders, which is being celebrated worldwide, indicates that women can be good crisis managers. This is also reinforced by how some female CEOs successfully navigate tempestuous corporate waters that sank several titans. According to Constantino (2014), when Meg Whitman took over the reins at HP, all business indicators were not looking good. The competitor base was growing, the share price was eroding and the market was commoditized and saturated with very little differentiation. Through a five-year plan that focused on restructuring and cost-cutting, she delivered most elements of her plan. In three years the HP share re-bounced and increased in value by 26%.

However, without taking away anything from female leadership Dr Gottlieb argued that our assessment of female leaders might be blighted by the law of few numbers. The sample of the female leaders is minuscule making generalization statistically infeasible. Women make up 7% of global leaders and the global share of women in senior executive positions is 29%. For the highly celebrated fortune 500 companies, there are only 37 female CEO translating into an all-time high of 7.4%. In light of the above, it is risky to quantitatively analyze, make conclusions and inferences about female leadership with such a small sample. Nevertheless, a qualitative approach that focuses on the characteristics of female leaders can bear meaningful results.

Women leadership is marked with certain characteristics that are discussed below:

Fisher (2017), asserted that women score higher on emotional intelligence or empathy test than men. This emanates from the fact that women have better social skills and understanding of people than their male counterparts. Women leaders bring their refined social skills and understanding of other people into leadership and this has a positive impact on the organization. Women leaders understand their subordinates better and are often viewed as role models and coaches. Female leaders enjoy high levels of engagement and relationships with suppliers, key customers, and other relevant stakeholders, owing to their good interpersonal skills and this is good for the overall success of the business. Female leaders heightened social skills are key in managing change and transition in the workplace because they are capable of eliciting and inspiring buy-ins from interested parties who can be a hindrance to change.

Premuzic and Gallop (2020), argued that women lead through inspiration and transforming people’s beliefs and attitudes, thereby aligning people with meaning and purpose. Due to their good interpersonal skills, women are better leaders of change and they achieve it through extensive engagements. This has a likely effect of not only smoothening change but also improving performance and productivity. Female leaders have better chances of emotionally engaging with their followers and instead of leading by command, many at times they lead by empathy.

Where most men are viewed as transactional leaders who aim at getting the most out of a single engagement, women leaders excel as transformational leaders. Burn (1978), transforming leadership occurs when one or more persons engage with others in such a way that leaders and followers raise one another to higher levels of motivation and morality. Owing to their relative high EQ and social skills women leaders tend to handle transformation and change management in a better way. Communication is a key prerequisite in leading change and transforming an organization. Women leverage their good social skills and interpersonal skills to build good communication networks within organizations. Transformation is better led through motivation and emotional engagement and women leaders prove to be masters of both.

Womens leadership is toned with motherly instincts and tends to take a coaching and role model complexion. In their conduct and leadership style, women leaders tend to be exemplary. According to Forbes Magazine, in a 2016 Gallup survey, women leaders were found to be more engaging to the employees under them, something that fosters cooperation in the workspace and improves employee wellbeing. In a survey by two New Zealand universities according to Human Resource Director, employees described a good leader as someone who shows concern, mitigates stress and burnout amongst employees. Though both male and female leaders were said to be capable of exhibiting these positive traits, workers guided by female leaders tend to be more relaxed, with less anxiety, depression, and burnout. Women leaders focus on building sustainable relationships and personal development, which improves the wellbeing of those who work under them. Communication is key for the effective functioning of any team for it begets cohesion and harmony. Women leaders are marked with better communication skills and commitment to communication, transparency, and honesty and this improves the wellbeing of their teams.

Premuzic and Gallop declared that female leaders are true talent agents, using feedback and direction to help people to grow. This means being less transactional and more strategic in their relationship with employees, and it also includes the openness to hiring people who are better than themselves, because their egos are less likely to stand in the way. It enables them to unlock other people’s potential and promote effective cooperation on their teams.

With empathy, understanding, and serenity women leaders tend to be great leaders during times of moral, political, or any other kinds of crisis. As the world battled the Covid-19 pandemic which began in 2019, countries that are led by women proved to be better prepared and responded quickly and effectively to the crisis, with Iceland and New Zealand both led by women, praised for being effective. Women comprise 7% of world leaders, their achievements in the fight against covid-19 are worth a big celebration. While the like of Boris Johnson in full masculinity and gentlemen prose played down the pandemic and Donald Trump at the height of his mania decided to play the blame game and fueling conspiracy theories, women leaders came across as humane and hands-on and they gave the grievous crisis the seriousness it deserved.

When Maya Barra took over the reins at GM, it was entangled in the worst crisis of all time in its 106 years of existence. 13 people died due to the faulty switch in GM cars, there were mass product recalls, congressional hearings, and compensation negotiations for families. Maya quickly exhibited leadership and acted in full transparency and honesty a move that earned her the crown of the crises manager of the year by the fortune magazine. This is opposed to how the devastating Deep-water horizon crisis was managed by BP male-dominated leadership

In a study of female and male leaders by Zerger and Folkman (2020), women leaders were rated more positively on 13 of the 19 competence that was assessed. This was also collaborated by how countries lead by female leaders recorded fewer casualties and deaths in the covid-19 pandemic. Furthermore, states lead by female Governors recorded low fatal cases in the United States. Below are the results found by Zerger and Folkman in their study. 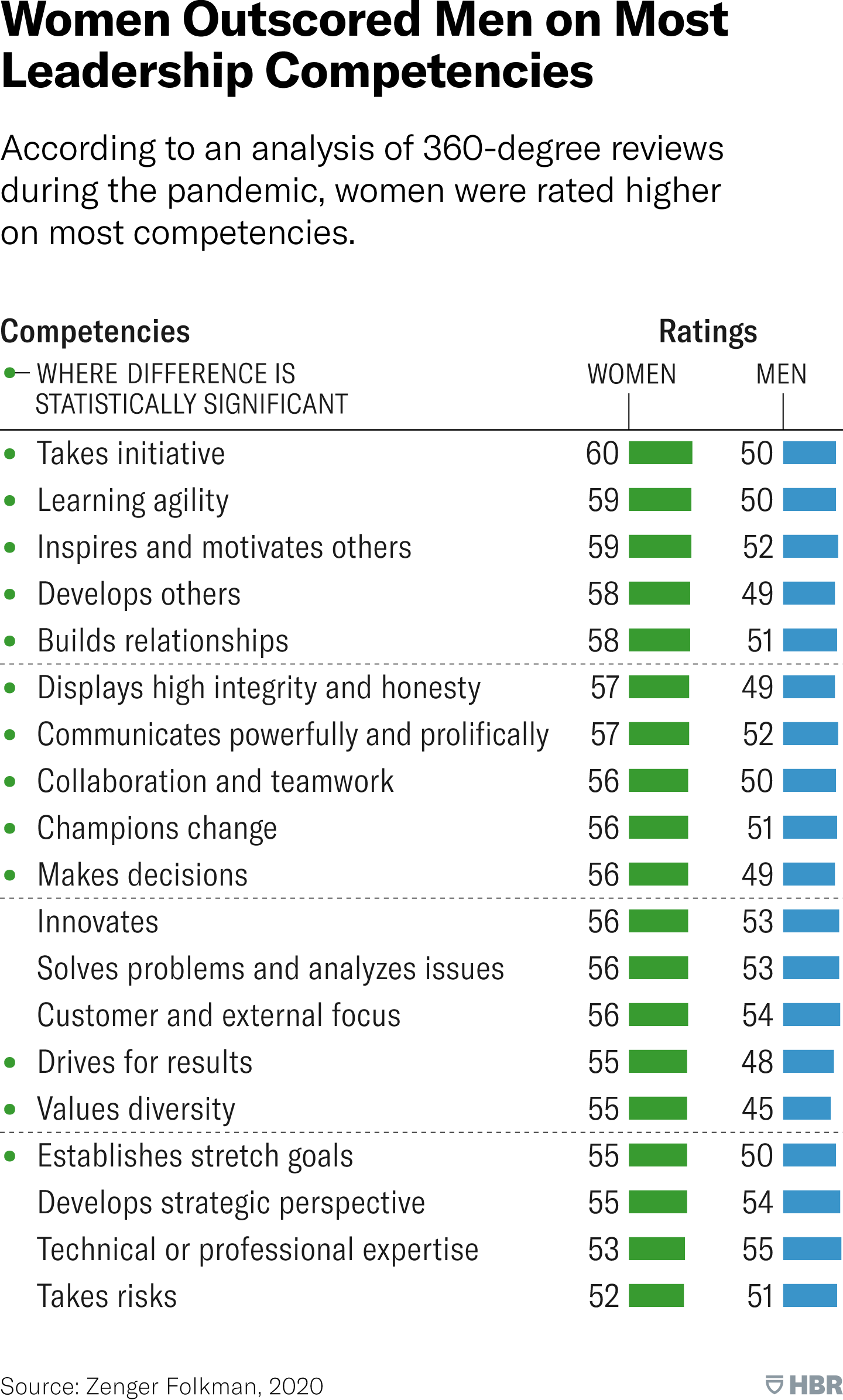 If we are to go by this study women extensively perform better than men in leadership positions. Men were rated more positively on technical/professional expertise but the difference is not statistically significant. The high performance of women on the assessed competencies is explained through their higher level of interpersonal skills and high EQ that allows them to lead with an understanding of their fellow human beings.

Since women score better than men on competencies like collaboration and teamwork their leadership is characterized by people-orientation and focus on team wellbeing as explained in the first section of this article. Work teams and groups are fraught with underlying social dynamics that tend to influence group relations and success. It takes good social and interpersonal skills to harness these dynamics to the overall good of the organization. As a result female leaders build and lead, better and high-performing teams. Furthermore, Zerger and Folkman found that female leaders are better at building good relationships with customers and other external stakeholders. In this customer-centric era, organizations win in the marketplace when they focus on serving customers and building strong relationships. This reinforces the superiority of female leadership over male leadership. Organizations also need to engage well with several publics and again female leaders are more capable of leading that than men.

Women Deliver Organisation reported that peace agreements are 35% likely to last for 15 years if women leaders are engaged in creation and execution. The same publication went on to reveal that companies in the top quartile for gender diversity on executive teams are 21% more likely to outperform the average ones. The presence of women in top leadership brings on inclusivity and diversity of views that enrich decisions that are made at higher levels. Womens ability to engage and empathize enables them to influence decisions that alter the quality of life for the greater good. Whilst most peace agreements negotiated by men are motivated by the pure pursuit of grander national interest, women leaders consider the minority, vulnerable, widows, and insignificant, hence their peace agreements are more durable and sustainable. Women are multitaskers and can operate from different directions and view from several perspectives.

In pursuit of Customer Relationship Management (CRM) based organizations women leaders excel relative to their male counterparts. The ability to build strong relationships, taking initiative, and focusing on customers make women leaders indispensable in leading organizations of the 21st century, (Ziger and Folkman, 2020).

Leaders exist to provide strategic direction and archiving goals for the organization. In that way, they can satiate the desires of interested parties, for example, great products and services for customers, an increase in value for shareholders, and job security for employees. Women leaders’ success in developing stretch goals, developing strategic perspectives and high drive for results make them a strong and big asset for organizations. If women can grapple with top leadership challenges, like strategy and objectives than men they can be better leaders. Moreover, it’s a prerequisite for leaders to have sharp abilities in dealing with problem-solving and analysis of issues. From the study, women leaders are better at handling problems and analyzing issues, making them better leaders.

The key characteristics of female leadership as outlined in the first section of this article are people orientation, transformation, team wellbeing, and better crisis management. Most female leaders’ strengths are a result of women’s high EQ, good social and interpersonal skills. Owing to good people skills women leaders build better relationships with key stakeholders like employees, customers, and suppliers. Women leaders leverage these skills to lead change and transformation in their respective organizations. Women lead transformation through motivation and engagement, which inspires subordinates and other players to follow the vision.

The leadership of the 21st century that demands more engagements with stakeholders, places a premium on leadership skills and competencies exhibited by women. As outlined in the article, businesses governed by customer-centric philosophy flourish in the marketplace compared to equivalent others. With women being better leaders in customer engagements and relationship building, they are effective leaders of this modern business era.

However, Gottlieb(2020), argued that with that the number of women in leadership at the moment presents a small size hence the law of small numbers may be at play in exaggerating the impact of female leaders. It may be misleading to generalize and make inferences from the study carried with such a small sample size.

In a nutshell, research indicates that female leaders are better than male leaders on several dimensions.

This article was prepared by Nicholas Mushayi a digital marketing consultant Trainee at IPC. He can be contacted on: nicholas@ipcconsultants.com or WhatsApp +263777914345