The battle of the genders is always present in all aspects of life. This time it is on whether women make better bosses than men. According to science, yes they do. In the world of business, men still outnumber women in senior positions, this is regardless of the countless studies which prove otherwise. A survey of more than 600 board directors suggested that women are better in these roles than their male counterparts. This fact is not supported in reality however since only 4.9% of Fortune 500 CEOs and 2% of S&P 500 CEOs are women.

A study conducted over forty years which analysed responses from 27 million employees discovered that the major reason for this was that women are better at encouraging employee engagement than men. This is a big game-changer for the argument given that 87% of employees worldwide are disengaged at work. This is especially tragic since companies that have engaged employees outperform their peers by 147% in earnings per share. Women make better leaders because they are able to take advantage of all of that potential.

Jack Zenger and Joseph Folkman conducted a separate research study of 7,280 leaders in 2011. This involved 360-degree assessments of the leaders in a variety of positions. In the study, they asked others to rate the leaders in 16 leadership competencies.  According to the data they found that women scored better than men in all but one of the 16 competencies, and in 12 of the 16, the women were better by a large margin. Ironically the two of the traits where women outscored men the most, taking initiative and driving for results, have long been associated with men. 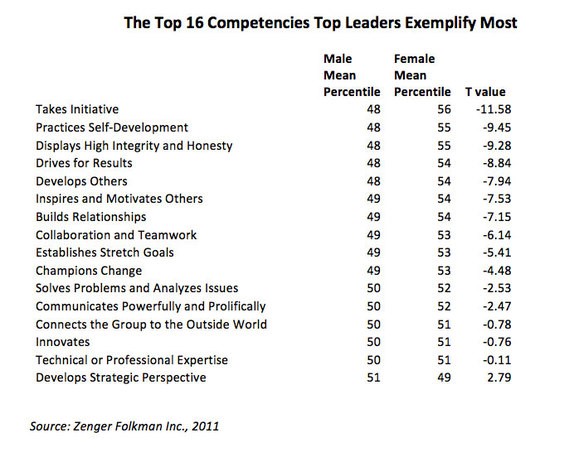 Other factors that contribute to these results are:

Women communicate better than men. Women are better listeners than men and this is the most decisive competence in the management of employees. Employees prefer a manager who pays attention to their ideas and point of view. Being an excellent communicator generates a strong relationship based on trust which is essential as it will bring faithfulness. Women build communities because they know how to develop a successful cooperative relationship better than the one who gives orders.

Women are more respectful of business ethics. They manage more effectively because they recognize and consider the rights of others, and want to respect a form of equity that they apply in a non-arbitrary manner. Women tend to apply strong moral codes that help when she faces challenges that could push her out of the law and norm.

Women are patient because they are very much willing to wait for a result of a change in the behavior of a collaborator. As a leader women are less likely to come to an immediate conclusion or make a rash decision or premature action. This makes them able to put in place measures that translate into small steps towards a more specific goal.

Dana Ardi, the author of The Fall of the Alphas, explained how the traditional top-down structure and male chauvinistic authoritarian leader is being substituted by a more collaborative and associated manager. Today’s workplace culture calls for leaders who exhibit traits like coaching, mentoring, teamwork, empowering employees, sharing information and responsibility, motivating and consulting. This makes women more adaptable in this day and age.

Success does not come overnight. Only those who can manage composure and be patient enough to take actions, and wait for results can truly succeed. Women are found to be more composed and patient with employees as compared to men. They take time in analysing the situation and are less likely to make a prompt decision or take action too soon.

Although all of these studies come to the same conclusion that women are better bosses than men it is important to remember that they are largely based on opinions. In reality, Gender doesn't matter, talent does. Great bosses owe their success not to their gender but to their capability and performance.

She became the first woman to head the European Central Bank on November 1, 2019. This puts her in charge of European monetary policy during a time of uncertainty in the EU. From 2011 until mid-2019, Lagarde ran the International Monetary Fund that works to ensure the stability of the global monetary system. She was the first woman to hold that position.

Angela Merkel has transformed German politics since being voted into office in 2005. She has been number one on Forbes’ most powerful women list eight times.  The politician with a doctorate in physical chemistry is considered the most powerful woman on the planet. She is sometimes referred to as the de-facto leader of Europe or “the decider”. She is a Protestant, childless woman at the helm of the Christian Democratic Union, a male-dominated, largely Catholic party that has changed not only the party but arguably also German society. She is constantly challenging the norms and is respected for it. This just goes to show how great a leader she is as she managed to fit into and lead such an organisation.

She has been CEO since 2014 and heads one of 2 companies in the entire world with no gender pay gap. She became CEO of General Motors at a time the auto industry was emerging from some difficult times. Shortly after Barra took over, GM was confronted with the ignition switch crisis as well as a series of other recalls. During this time she experienced what some researchers call the ‘glass cliff’. The term, coined by University of Exeter psychologists Michelle Ryan and Alex Haslam, suggests that women are breaking the glass ceiling only to tumble over a figurative cliff. Ryan and Haslam theorize that women are often promoted to dangerous jobs during a crisis when the risk of failure is high only to absorb the blame when their efforts fail or are slow to produce results.

Ultimately, she helped lead the company out of the public relations crisis and established herself as the respected head of the global automaker.  She now holds the combined role of Chairman and CEO.

In 1999, Susan Wojcicki became the 16th employee at Google. Since then, she has established herself as a tech visionary with shrewd business acumen, becoming Google's Senior VP of advertising and commerce and spearheading the launch of Google Analytics. When she learned about YouTube, an emerging video sharing platform competing against Google's video service, she proposed acquisition, and in 2006, orchestrated the $1.65 billion purchase. Since being named CEO of YouTube in 2014, Wojcicki has lifted the site's worth to an estimated $90 billion and has made it a priority to sweep the site for policy-violating content, bots, and hoaxes.

After joining PepsiCo in 1994, Indra Nooyi was named the company’s 5th CEO eight years later in 2006. Under Nooyi’s guidance, PepsiCo succeeded much by way of expansion and acquisition. This includes the purchase of Tropicana in 1998. The former alone gave PepsiCo a competitive edge, as Tropicana controlled 44% of the American chilled fruit juice trade.

In 2007 and 2008, Nooyi was listed as one of the Wall Street Journal’s 50 Women to Watch. And in October 2010 she was ranked by Fortune magazine at 6th place on their list for the Most Powerful Women in the World. By 2015, she climbed to 2nd place.

As COO of Facebook, Sandberg has played a key role in driving revenue for the social network, while strategically outlining the site's plans to crack down on fake news and enforce its user policies more strictly. She cites accountability as a major key to business success, saying: "Take responsibility. Don't say, 'The project didn't get finished because my colleague didn't do his part'; say, 'The project didn't get finished because I didn't set up a team in which my colleague wanted to do his part.' When you take full responsibility, you are empowered to achieve."

Shotwell was employee No. 11 in 2002 when she joined SpaceX, a company founded to lower the cost of space travel and enable the colonization of other planets. Today, SpaceX has grown to more than 6,000 employees and contracts valued at  $33.4 billion. Shotwell runs day-to-day operations and customer relationships, but her official title might as well be the rainmaker. She takes CEO Elon Musk’s seemingly outlandish ideas (and idealistic timelines) and makes them happen.

CFO of Google parent company Alphabet since 2015, Porat has cut spending on "moonshot" divisions that only account for .9% of company revenue. Ruth's career was a topic studied in the 2009 book 'How Remarkable Women Lead' by McKinsey & Company written by Joanna Barsh & Susie Cranston. Institutional Investor magazine, named her as the 'Best Financial Institution CFO' in the year 2014 and 'Best Internet CFO' in 2018.