Organisational citizen behaviour: Everything you need to know

What are organisational citizen behaviours?

According to Jahangir et al. (2004), job satisfaction is linked to job performance and OCB. Employees with high levels of job satisfaction have been observed to possess high OCBs, the same goes for organisational commitment. Van Dyne et al. (1995) defined affective commitment as a firm conviction in and acceptance of an organisations goals and a strong desire to remain a member of the organisation.

Role perceptions include role conflict and role ambiguity, which are adversely connected to OCB (Jahangir et al., 2004). Role clarity and role facilitation, on the other hand, are positively connected (Podsakoff et al., 2000). While both role ambiguity and role conflict are known to impact employee happiness, and satisfaction they are linked to OCB, satisfaction likely mediates at least some of the relationship between ambiguity, conflict, and OCB.

Leadership appears to have a significant impact on a workers desire to participate in OCB. Rather than being linked to a certain leadership style, research shows that the quality of an employees connection with their boss is more critical (Podsakoff et al., 2000). Leader-member exchange is a term used to describe the quality of a subordinates connection with a leader. The leaders contingent reward behaviours, such as expressing happiness or admiration for strong performance, are another leadership characteristic that is positively associated with OCB (Podsakoff et al., 2000). Employee views of fairness and justice in the workplace may also have an indirect impact on OCB.

According to Jahangir et al. (2004), employee perceptions of fairness and justice include whether or not employees believe overall organisational decisions are made equitably and with required employee input (procedural justice) and whether or not employees believe they are fairly compensated for their level of training, tenure, responsibility, or workload (distributive justice).

Personality appears to be one of the essential characteristics influencing the appearance of prosocial activities at work. In a meta-analysis published in 1991, Barrick and Mount found that conscientiousness and emotional stability were strong predictors of work performance. The link between personality characteristics and job performance is supported by scientific research that shows how important this aspect is in the workplace. Certain parts of personality appear to be more strongly linked to prosocial behaviour than others. Desrumaux et al., for example, found that agreeability had a significant role in explaining prosocial behaviour.

Jahangir et al. (2004) noted that recent research that uses motivation to assess an individuals disposition had rekindled interest in Organs (1990) model, which suggests that an individuals motives may be related to organisational citizenship behaviours (Kemery et al., 1996; Tang & Ibrahim, 1998). Penner et al. (1997) looked at how personality and motivation affect OCB.

The notion that younger and older workers may have fundamentally different perspectives on work and self is not new (Jahangir et al., 2004). Education professionals feelings of attachment, belonging, and duties toward their organisation are expected to develop as their age and tenure increase, resulting in good attitudes and actions that help the organisation thrive, leading to OCBs. 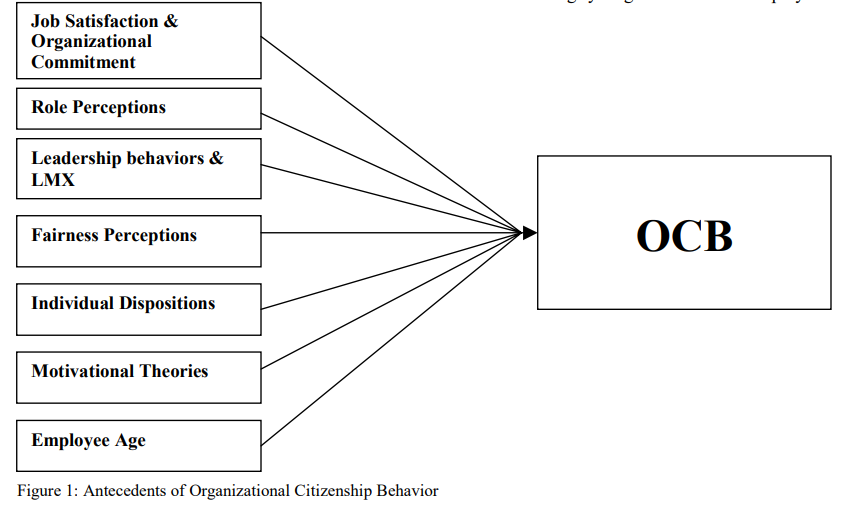 When one employee helps or serves another employee without expecting anything in return, this is known as altruism. Someone assisting a coworker who is overworked by taking over part of their chores or volunteering to help clean up the canteen after an internal corporate event is a basic example of altruistic conduct at work. Other employees stress levels may be reduced due to altruism, such as those who feel overwhelmed without a little assistance, resulting in increased productivity. Employee morale, productivity, and effectiveness may all benefit from altruism in the workplace.

Courtesy is the practice of being gracious and thoughtful to others, in this example, other employees. Saying good morning and asking a colleague how their holiday was, how their kids are doing, or how a project theyre working on is going are instances of courtesy at work; generally, any question related to a (personal) subject someone has previously spoken about that demonstrates youve listened to what theyve said and this fosters a sense of belonging.

Sportsmanship is an employees capacity to lose gracefully. Its about dealing with events that dont go as planned or unpleasant shocks without displaying negative behaviour.

An employee who is temporarily taking up the responsibilities of a team member who shattered his leg and will be on sick leave for a few weeks illustrates excellent sportsmanship in the workplace. While this raises this employees burden significantly, they arent grumbling to their coworkers since they understand that this is a transitory issue and are doing something for the team.

Conscientiousness is behaviour that demonstrates a high level of self-control, dependability, discipline. It goes above and beyond the bare minimum. In the workplace, this implies that employees not only arrive on time and meet deadlines but also prepare ahead of time before going on vacation so that their coworkers are not overworked.

Having the self-discipline to wake up in the morning and get the job done, even when there is no manager nearby to give you a shove, is an example that is relevant to a remote work setup. Conscientiousness also entails understanding that there are times when work just must be completed, even if it is after hours.

Civic virtue refers to how well someone represents the organisation for which they work. Its about how an employee helps their firm even when theyre not on the clock. For example, how do they communicate about the organisation with their friends and family?

Employees can also display civic virtue by participating in company activities like fundraisers or running a marathon for a charity with a group of coworkers. Civic virtue is an example of corporate citizenship activity that fosters a sense of belonging and camaraderie. As a result, there is a higher level of job satisfaction and improved job performance.

"An individual behaviour that is not rewarded by a formal incentive system... but that, when joined with similar behaviour in a group, results ineffectiveness," Dennis Organ defined it in 1988. Organisational citizenship behaviour has been connected to job productivity, employee effectiveness, and other elements that might have a short or long-term effect on an organisation. The following is a list of the benefits of OCB