How do build team cohesion

Team cohesiveness arises when bonds link members of a social group to one another and the group as a whole. Before we go any further with our discussion of cohesive teams, we must first define cohesion. According to Schenk and White (2021), cohesion is a process where members who see different aspects of an issue can productively explore their differences and seek answers using their collective ideas. These can be internal teams, made up of members from different divisions.

The fundamental objective of forming cohesive teams is to bring people together to achieve a similar goal or vision. The idea behind using cohesion is that different people are more likely to come up with better explanations for various jobs at hand, the work is done faster and with better quality. The times have moved away from the days when one person would be handed a task with a possibility that at the end of the day, the end goal is not of the best quality.

With the growing use of technology in communicating with people, the idea of cohesive teams has increased and has become more attractive for many organisations. In addition, the experience of the COVID-19 pandemic has made organisations opt for the use of online communication. Scheduling meetings over sites such as Zoom and Google Teams have made it easier for this to become a reality. While this is the case, it does not take away from the fact that Cohesive teams have been around for a long time and are also famous in physical group meetings.

Venturing into the use of cohesive teams is a good idea and will probably yield abundant results. If an organisation is planning on integrating cohesive teams into its systems, there are some issues to look out for.

The Benefits of Cohesive Teams

Below is a graph of the survey results from a Harvard Survey conducted in 2019 regarding the perceived benefits of cohesive teams. More and more organisations are beginning to appreciate the benefits that may come along with introducing cohesive teams into the system of doing things. 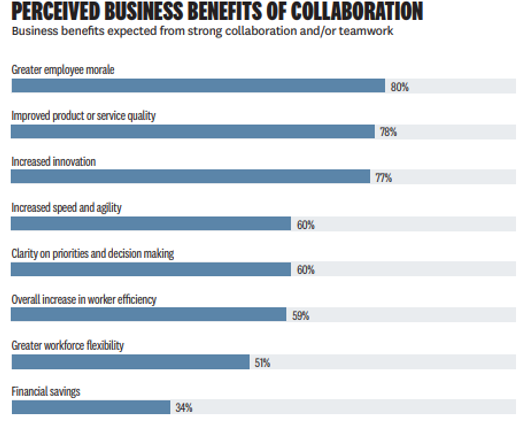 Cohesive conundrums are inevitable. When faced with this situation, it means that there are some issues regarding the new team. Remarkably, some of the pillars that strengthen a cohesive team can be the very reason why the team fails. These pillars are outlined by the Harvard Business Review (2017): large size, diversity, virtual participation, and educational levels.

Just 10 years ago, teams rarely had more than 20 members, research shows that the size of teams has increased significantly as a result of new technologies. Large teams are frequently formed to ensure the participation of a diverse stakeholder group, the coordination of a variety of activities, and the honing of many talents. According to another research, when the size of the team grows over 20 members, the level of natural cooperation among team members decreases.

The varied challenges that todays businesses face need people with diverse experiences and perspectives. In many cases, a sizable portion of the team would have never met. While their diverse knowledge and perspectives can stimulate insight and creativity, research suggests that the higher the number of people on the team who do not know anybody else and the greater the diversity, the less likely the team members are to share knowledge.

Because of the ever-changing global dynamics, most complex collaborative teams have members who are working at a distance from one another. Technology has allowed for team members to able to be working in ofï¬ces in the same city or spread out across the world. In a Harvard Business Review survey (2017), results showed that 40% of the teams in the sample had members all in one place. This meant that the remaining 60% was made of people in various areas. The survey also revealed that as teams become more virtual, collaboration declines.

Complex cohesive teams often generate huge value by taking advantage of a variety of deeply specialised skills and knowledge to create new solutions to new or existing issues. As with the other three pillars above, the research shows that the greater the proportion of highly educated specialists on a team, the more likely the team is to disintegrate into unproductive conï¬‚icts

In every team, there needs to be the right composition of the right people in the group. As we have come to understand, collaborative teams are not the normal type of teams. Not everyone can be successful working or learning with people they are not familiar with. Callahan, Schenk, and White (n.d.), point out the three most important kinds of people to have in a collaborative team. Investing in signature relationship practices – The executive or senior management team can inspire cohesive team behavior by making investments in offices such as those with open ï¬‚oor plans to foster communication. Many organisations have moved from a one-person office to team rooms, where employees, even from different departments can interact each day (Assbeihat, 2016).


The Type of Team Players to Have in a Cohesive Team

Every team requires the proper makeup of the right people in the group. Cohesive teams, as we have seen, are not the typical type of teams. Not everyone can be successful working or learning with people they are not familiar with. Callahan, Schenk, and White (n.d.) point out the three most essential kinds of people to have in a cohesive team.

While cohesive teams may appear to be a difficult project to begin, the potential benefits may outweigh the effort required to make them a success. As stated before in this article, organisations have several approaches to ensure that they have a very successful cohesive team. Having a diverse cast on the team can open up new avenues of thought and ideas that have never been explored before. Many organisations operating in this global village have found these teams to be beneficial.